Description: There is an increasing trend for  people to get tattooed with the ashes from a loved one’s cremated remains . For these tattoos(called memorial tattoos), a small amount of ashes are mixed with the ink that the tattoo artist uses on the body. In this way, whoever is getting the tattoo will always have “a piece of their loved on” on their skin.

There is an innate desire to take possession of those who we lose, to keep them with us even though they are gone. This desire has evolved, it has become a fixation. We suddenly need loved lost ones to be closer, more present in death than they were in life, more real and at the same time more ideal.

People become obsessed with the symbols of their loved ones. They have to immortalize them; they have to own them in a way that ensures no one can take them from their hands, that no one can deface them or pollute them. What better place to guard your loved one’s ashes than on an ideal image on your own skin?

The act of tattooing is, in itself, an act of immortalization. This  trend of marking one’s skin with a loved one’s ashes is an expression of the denial that occurs when you lose someone. You do not want to let them be gone. Increasingly, people are appropriating their loved one’s image and making it a part of themselves with memorial tattoos. Whatever symbol or image is chosen to represent that person in a tattoo, is an idealization: it was chosen for the purpose of representing or remembering that person in a specific way. In a way, tattoos are not a tribute to the deceased; instead, they are an expression of people’s own selfish desire to own them in their death. By taking possession of their loved ones in this way, they ensure that the image they constructed of their loved one stays intact.

After the recent economic crisis Detroit, the industrial heart of America, started to decay. Due to the shutting down of major factories and offices many of its habitants had to move away to find new job opportunities. Now one of the major and most influential cities in America is waiting for its slow death with its empty offices and homes.

“Urbanification” is a term used to describe the transformation of a somewhat rural area into an urban and fast living city. This transformation also displays the evolution of the human civilization in the twenty first century. The tall buildings and ever growing population shows how far the humans have come from the invention of fire. New York is one of the great examples in this case, but like anything in this world everything must come to an end and before death there is destruction. Detroit is now becoming a perfect example of destruction of civilization. Once glorious factories are now abandoned, many houses and public places are decaying each moment. Now the city looks a scene from a zombie movie where almost everywhere is deserted. But the positive aspect to destruction is that when something is destroyed one has the opportunity to build something new on the same place. This does not necessarily has to mean destroying these old buildings and replacing them with taller and bigger ones. Detroit is an great example of why the civilization we are living in requires alterations or my needs to be completely destroyed so it can be rebuild better. There is no precaution that could be taken in order to not have the same situation in New York. Maybe this scenery of horrific transformation and abandonment is the perfect reason why we have to destroy everything and start over a fresh page

Description: Vlad Tepes, A.K.A Vlad the Impaler, A.K.A Prince Vlad III Dracula, was notorious for his methods of torment, mutilation, and slaughter. He would do things that ranged from skinning and boiling people alive, to the classic beheading. His preferred method of torture; however, was impalement. He would force a person to sit on a wooden stake and by the time their feet reached the ground, the person was dead.

Interpretation:  The character Dracula in Bram Stroker’s 1897 classic novel is based off of Prince Vlad III Dracula. This man was a 15th century ruler in the kingdom of Wallachia, which is now known as southern Romania. He was known to be a “man of many faces.” He spoke four languages, was a politician, a warrior, and apparently could be every charismatic when he saw fit. According to some historians, Vlad once left 20,000 enemy soldiers outside of his city to rot and die. Another army came looking for Vlad and left as soon as they saw the “forest of rotting men.” Vlad also enjoyed cutting off the sexual organs of women just for the fun of it. He was also known for feeding the homeless and then barricading them inside buildings and setting it them on fire. Nobody knows for certain how Vlad died. It is speculated that he either died in battle or he was betrayed by one of his closest companions. In his lifetime Vlad killed anywhere from 40,000 to 100,000 people (some even his own). What Vlad did to human beings was very cruel. However, the true cruelty lies in the individuals who praise him and call him a hero. He was and still is respected for being a strong and fearless ruler. He stood up against Turkey and Hungary and did not tolerate thievery, lies and deceit. People love him because they believe that the Turks were gruesome individuals that deserved to die. They believe that Vlad did things that other people were afraid to do and his methods were what made him a hero. Anyone who could look at a man who brutally killed men, women, and children as a hero, is truly cruel.

The Water Torture is a form of torture that uses the element of liquids, be it hot or cold, to inflict physical and psychological harm on a victim.

Fashioned in the middle ages, this form of torture involves the victim being strapped down while water is poured down the victim’s throat through a funnel. Through more violent techniques, cloth was sometimes forced down the throat while pouring water. As the cloth is rapidly soaked with water, water is able to freely flow everywhere; mouth, nose, eyes, ears. This forces the victim to induce a certain swallowing reflex while the cloth is pushed further down into the stomach and gradually drowns the victim through suffocation or until the victim has lost consciousness. In this respect, pain by suffocation is evoked by water torture; it provokes the use of choking and triggers the sensation of slow-motion drowning.

The use of water in torture can also be replaced by more harsh elements. Depending on the intended cruelty, torture was sometimes conducted with boiling water, vinegar or hot oil. Death is usually occurred by immense pain from severe scalding or the rupturing of the stomach. Pain reverberates through the victim’s body as prolonged scalding would result in anything up to fourth-degree burns. The final execution is delivered when heat destroys the skin, breakdowns fat and eventually exposes muscle tissue, leading to breaches in the major arteries and veins.

During the middle ages, the fear of wolves and misguided faith blinded people in spilling innocent blood. A “werewolf” captured in 1598 was treated with water torture which led to the ingestion of a large tub full of water. His belly was extremely distended and hard, refusing to eat or drink and died of thirst and hunger a few days later. 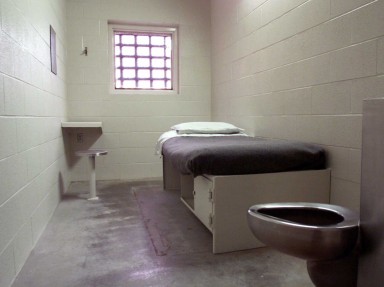 Description: Herman Wallace was placed in solitary confinement following the 1974 murder of a prison guard in a Louisiana prison.  Now 72 years old and dying from cancer of the liver, it is believed by many that Wallace did not commit the crime, rather it was an act of racism on the part of the judge, jury, and the court of public opinion of those in the southern states in the days of the supposed post-civil rights era.

Solitude is often perceived as a peaceful temporary removal of oneself from society.  Even the very appearance and sound of the word gives off a soothing feeling.  Many of the great artists and authors lived solitary lifestyles, however when solitude is not a conscious decision it can feel like torture.  When one is faced with the issue of torture, there is often a certain image that comes to their mind.  They may conjure up images of Jack Bauer, from Fox’s television series 24, using torture techniques against terrorists for information to save the innocent lives of those that are being targeted by the criminal.  Or they may think of the recent videos of journalists being held captive and being decapitated at the hands of the terrorist group ISIS.  However, for the upwards of 80,000 individuals currently living in solitary confinement in prison cells across the United States, they believe that their solitude is the worst kind of punishment possible.  A journalist for ABC News, Dan Harris, thought spending forty-eight hours as a prisoner in solitary confinement would be easy and he even said the two day prison sentence sounded “appealing”, but the accounts of his short stay at a Denver prison are very disconcerting.  He says, “The worst part is the screaming. The sounds of my fellow inmates losing their minds was incredibly unsettling” (ABC News).  This is the kind of insanity that Herman Wallace has had to deal with for close to forty years.  Wallace, a black man, was accused of killing a white prison guard in a Louisiana prison and has since been held in solitary confinement after his guilty verdict that many today call into question.  The psychological torment that has haunted Wallace for so many years is agonizing to imagine.  Being locked in a 6’ by 9’ room for four decades alone is enough to destroy a man.  Having no personal interaction with other people, being held in a small room like a caged mouse that the owners have forgot about, and the boredom of everyday life are the things Wallace has had to deal with.  Imagine if he had truly not committed the crime and that he was innocent.  What would his life have been like?  Imagine the inner turmoil he must have felt being alone with only his thoughts to console him.  Maybe he saw the surveillance cameras as a way to connect to others, but more than likely when he was looking at the camera no one was on the other side looking back at him.   Fortunately for Wallace, he has finally been removed from solitary confinement but this is only so that he can die in peace.  Wallace has been dealing with liver cancer for years and his health is deteriorating quickly.  There is no doubt in my mind that his solitary confinement ultimately led to Wallace’s health issues.  Solitude for Herman Wallace was not a peaceful experience.  It will lead to his death and he will likely only be remembered for his stay as a prisoner.  (The Atlantic)